From Mud was founded by a young ceramicist who saw a need for the therapeutic and magical art of clay sculpting in the heart of Kuwait City. The zen workspace, located on the first floor of a 1967 Modernist structure in Kuwait City’s textile market, draws inspiration and texture from the beautiful clay craft and its simplicity. The studio’s holistic approach is communicated through clean lines and a soothing palette that reflect the studio’s guiding theory. 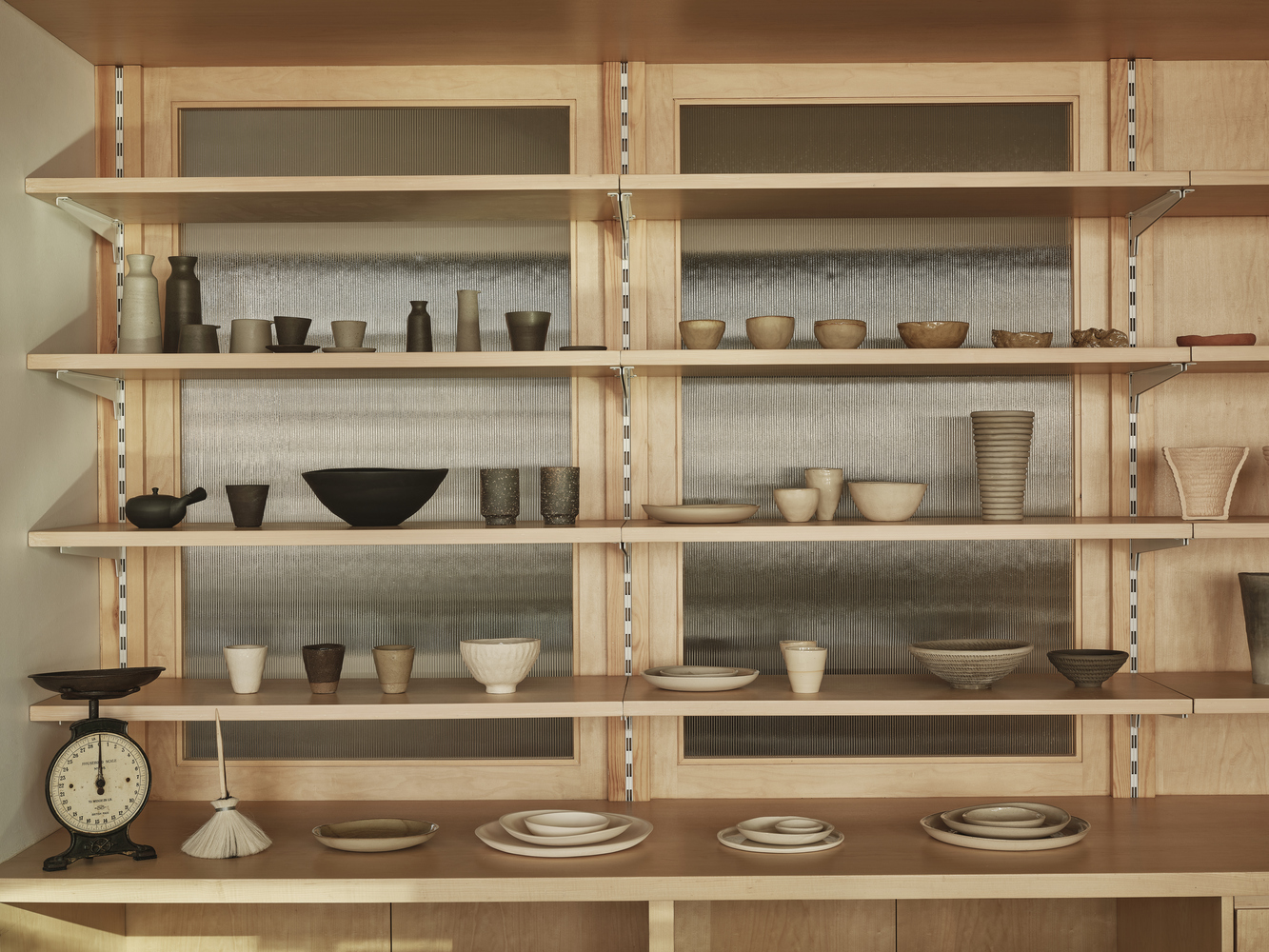 From Mud began observing the movements inherent in clay creation, from the ceramist’s own motion to the fluid lines formed by the clay itself. One of the most attractive features is the light distribution, which mimics the building’s concrete façade and casts simple shadows throughout the space while providing privacy through the fluted glass. As a continuation of the façade, the perimeter shelving’s steel and maple wood construction creates a calm and functional environment that reinforces the young potter’s mission of making clay art accessible to everyone.

Also Read: The Current Temple Town Collection Is A Tribute To The Craft Of Kerala.

From Mud is a design studio that works exclusively with clay. The brief was to structure an environment of discovery, research, and creation in which people of all skill levels could come together to create a finished piece to take home. The specifications included storage and shelving that matched the ceramicist’s daily routine, a kiln room, a semi-private office, and a lounge area.

The primary challenge is to maximize storage and efficiency. 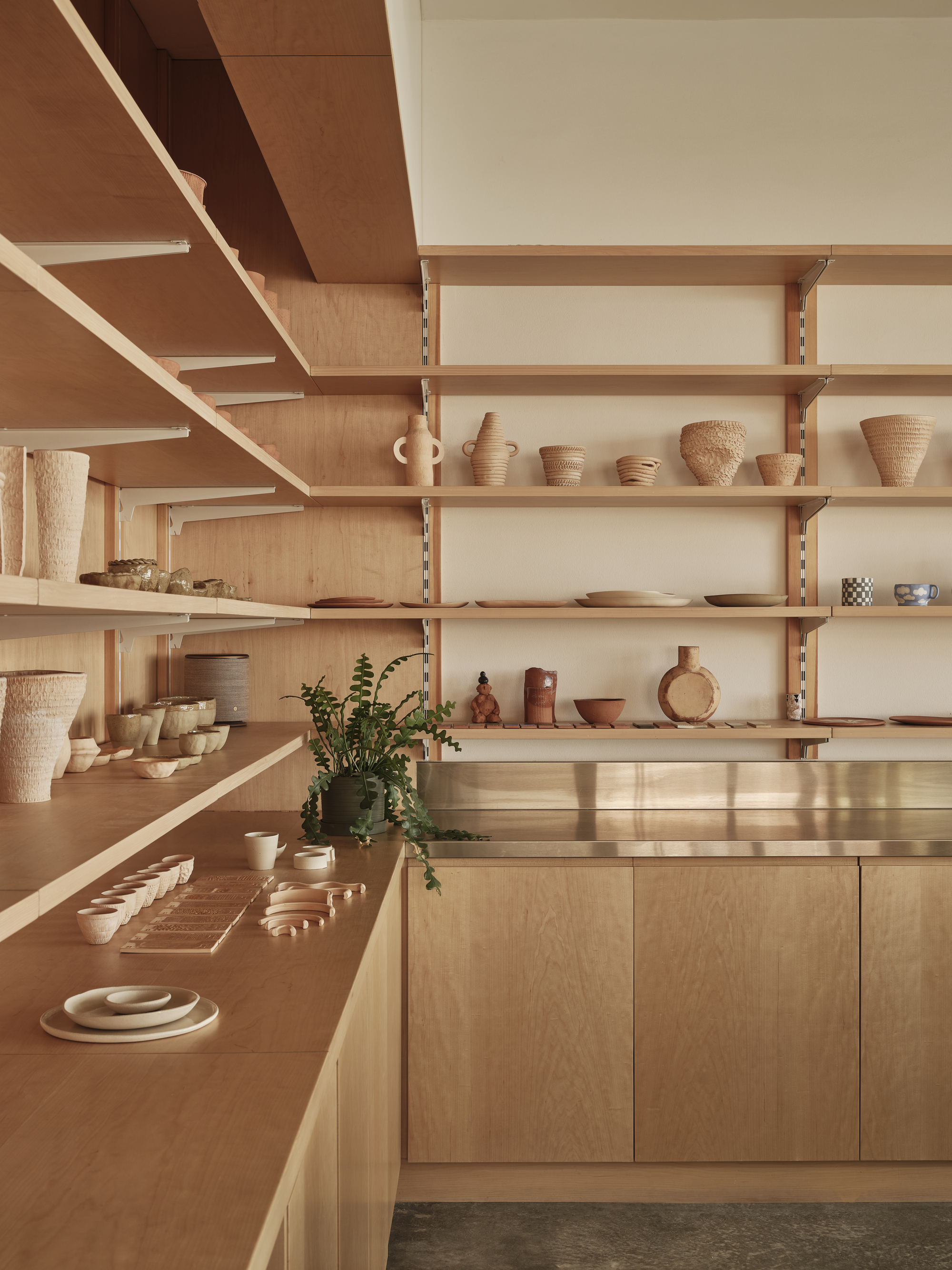 Also Read: This Organic Waste Stool Can Be Shown, Re-Molded Or Just Returned As Soil To The Earth.

Maple wood, both solid and veneered, is sourced from Malaysia and fabricated on-and off-site by local artisans. adjustable shelving system and brackets made of stainless steel and powder-coated metal, with fluted glass. The importance of natural and adequate light was emphasized throughout the design phase, as the necessity of honest and proper light while crafting clay was questioned. By translating the façade of the building into the rhythm of the perimeter shelving, you can begin to see the interplay and juxtaposition of the facade’s shadows against the interior at various times of the day. The fluted glass was then added to create transparency and provide privacy where it was required.

Aisha Al-Saif, a ceramicist based in Kuwait who desired a therapeutic space in the heart of Kuwait City. Her mission is to make clay design accessible to everyone by teaching various techniques from throughout history and around the world.

In an urban sense, the building in which From Mud resides was once the city’s largest shopping centre. It established a new, modern urban environment in a covered market. Today, we see that retail vendors have remained on the street level, but the upper floors have dwindled in popularity. Mud spaces reshape the urban fabric and introduce new energy, bringing an audience into previously neglected areas. The building’s façade is protected from Kuwait’s harsh sun by concrete plates that resemble the fabric palettes sold downstairs. This was translated into the interior’s adjustable shelving as a nod to the exterior.

How To Create Environmentally-Friendly Buildings